Faced with rapid urbanization, population growth, and the rise of new mobility solutions, the French road-construction industry is adapting. As habits change and the demand for smarter, more eco-friendly transportation grows, the major players of the infrastructure industry are relying on big data and emerging technologies to rethink how roads are designed.

With nearly 750,000 miles of roads, France boasts the largest road network in all of Europe. Rebuilding it today would cost 2 trillion euros ($2.375 trillion)—not far off the nation’s GDP. Fortunately, road traffic—which is responsible for more than half of the nitrogen oxide (NOx) emissions in the Île-de-France region surrounding Paris—is evolving toward greener forms of transportation, such as car sharing, bike sharing, e-bikes, and trams.

Adapting to New Forms of Mobility

For many working in France’s infrastructure industry, the goal is to use these new forms of transport as catalysts for the development of both on-board and on-road technologies.

This vision is supported by Hervé Dumont, director of Forecasting, Technology, and Development at Eiffage Route, a major player in urban development and road construction. “There is a tendency toward spaces that are shared and adaptable,” he says. “Today, forms of mobility are multiplying and evolving, and infrastructure needs to adapt accordingly.”

For François Olard, technical director for Infrastructure Research and Innovation at Eiffage Route, vehicle modernization is the perfect example of why infrastructure needs to adapt. Due to regulations on CO2 emissions, cars have been the first to go green. Whether electric or hybrid, these new vehicles require not only space for parking but also suitable recharging stations and road signage.

“These new solutions must use space in a dynamic way, with road signage that adapts,” Olard says. “Take the lanes reserved for buses and taxis, and imagine that when a bus or taxi goes by, cars have to clear the lane, whereas the rest of the time, they are free to use it just like any other lane.”

A dynamic road signage system could also allow for better management of commuter traffic. This is the goal for France’s first-ever carpooling lane, which opened in September 2020. The lane extends across 5 miles of the A48 highway on the outskirts of the southeastern town of Grenoble, on a stretch of road that is particularly affected by congestion.

As the French are learning, the benefits of a carpool lane system are twofold: Traffic jams are alleviated, and CO2 emissions are reduced. In Grenoble, carpooling lanes require adaptive signage equipped with sensors that can detect the number of people in a vehicle.

Capitalizing on Smart Infrastructure: Road Design Must Reflect Use

Although car-sharing and carpooling practices have decreased during the COVID-19 crisis, road transportation will continue to evolve according to climatic conditions. For Dumont, adapting involves rethinking the lanes designated for car traffic and “anticipating how needs will change.” As an example, he cites the fact that commuters might prefer to travel by car rather than bicycle in winter. “The future rests on road developments that are capable of adapting in real time,” he says.

This view is shared by Bernard Sala, president of Routes de France and deputy general manager for Responsible Development and Innovation at Colas, a leader in road infrastructure construction. “It would be a shame to go through this crisis and not take action, armed with new tools that help integrate environmental and digital factors,” he says. “Road design must reflect use.”

Road design must also adapt to bikes, which have become very popular during the pandemic. The boom can be attributed to several influences. For the past few years, cycling has been favored by people who take reducing their carbon footprint to heart. Cycling is also endorsed by government initiatives and subsidies that aim to make the practice more widespread throughout France, including the suburbs and even the countryside.

This spring, more than 600 miles of temporary bike paths popped up across France. Some cities have already made some of these paths permanent, as is the plan in Toulouse. And yet, these initiatives will only endure if supporting signage and equipment, such as recharging stations for shared e-bikes, are installed. Dumont says that these spaces must be earmarked so that they are given priority, protected, and respected.

“Thanks to sensors and mobile measurement solutions, it’s now easier to track presence and crossing times for a bicycle compared to a pedestrian,” Sala says. He goes on to explain that multi-parametric techniques are one of the keys to optimizing traffic control systems.

Today, infrastructure sensors can assess the condition of roads. In the future, they will be able to communicate with in-vehicle sensors and smartphones to help guide drivers. They’ll also be able to feed into smart infrastructure, street furniture, and pavement markings that adapt in real time in response to sensor data, improving both the road-design process and overall operational management.

For Sala, this step is vital to the development of more flexible, multipurpose smart roads in the years to come. As an example, he cites city bike paths, which he says are “empty at certain times and dangerous to use at others.” He goes on to state that “road studs will have to be retractable or flexible over the course of the day in order to facilitate traffic and deliveries.” 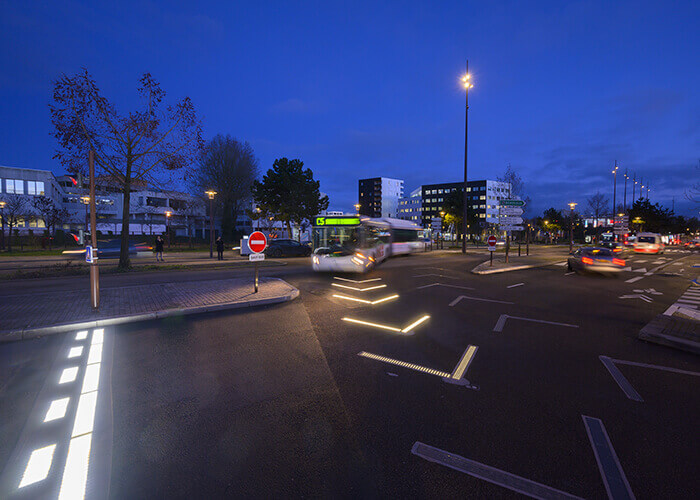 At an intersection where accidents have been known to occur in Nantes, a city in western France, the Flowell project prioritizes buses with illuminated arrows that indicate direction of travel. Courtesy of Julien Gazeau/Colas. 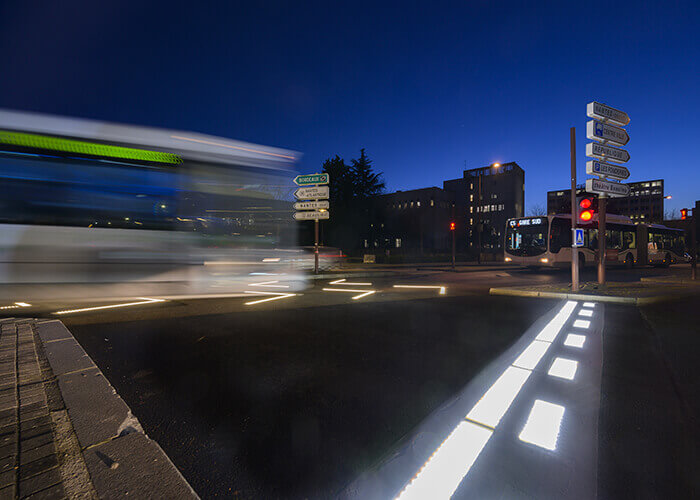 The illuminated line on the pavement increases the impact and visibility of the traffic light, cueing drivers and cyclists to stop and yield to buses. Courtesy of Julien Gazeau/Colas. 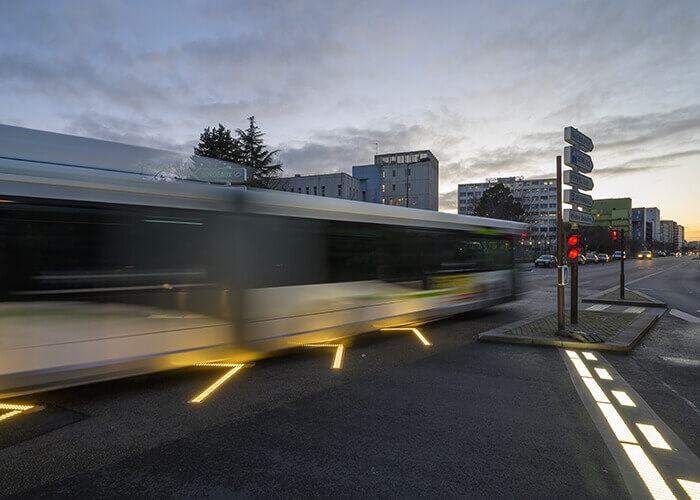 The Flowell project was awarded a Silver BIM at the BIM d’Or Awards in September 2020. Courtesy of Julien Gazeau/Colas.

On September 3, 2020, the French government announced a recovery plan to allocate 1.2 billion euros to everyday mobility in order to encourage infrastructure development. This fund was subdivided to cover two main uses: to double resources for cycling traffic and to improve existing public transport and create exclusive routes to expand these services. A total of 550 million euros is earmarked to speed up transportation infrastructure work that is currently underway.

For Dumont, the stakes of modernizing road infrastructure lie both in how roads are built and how well they incorporate digital and emerging technologies. The aim is to integrate environmental factors and sustainability into construction while keeping pace with changing traveler habits and needs.

“Roads are not just a means for getting around,” Sala says. “They have many other uses that are necessary to develop—essential facilities for recharging and storage, as well as parking management—as standard … which would go far beyond a simple concession.”

This new reality is pushing market players to adapt. “For the past few years, we have been moving towards a more systemic approach,” Olard says. “Our role is opening up to transportation that is more and more connected. This new approach is now accelerating mainly around big data and energy.”

That’s with good reason: Although Europe has all of the road infrastructure it needs, to prepare for the future, road infrastructure must be maintained and improved upon by relying on data and emerging technologies rather than new construction. To tackle these changes, companies in the roads sector are considering design methods that stem from digital transformation and specifically on integrating data-rich processes such as BIM (Building Information Modeling).

Eiffage teams admit they have encountered challenges that other industries do not face. “Objects are more difficult to describe because this type of infrastructure is linear and nearly infinite,” Dumont says. “It’s not easy to characterize diverse properties like thickness, material type, or even thermal performance as attributes in digital form.”Despite these obstacles, the goal is to generate enough data to create a digital twin. “Ultimately, the challenge involves integrating every step of a project, from the initial idea all the way to construction, rendering the systems interoperable at all stages of design,” Dumont says.

This cross-cutting approach would make it possible not only to improve road surface quality and safety but also to use design to address concerns regarding water drainage, storage, and heat diffusion, according to Sala. “Putting the digital twin and artificial intelligence to work is what will enable us to derive meaning from them,” he says. “Soon, we will be working with systems that are extremely complex. Through digital modeling and simulation, new solutions with more accurate data can be provided to help designers and local authorities better integrate roads into the environment.” 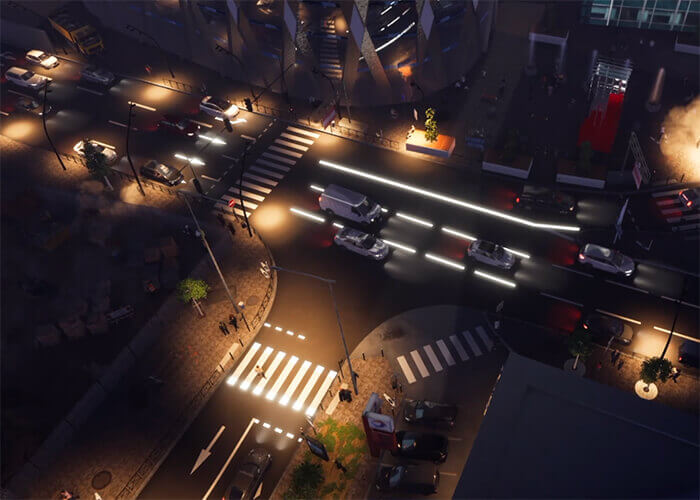 Tested on the Flowell project, generative design has proven to be quite convincing. It has served to create the dynamic pavement markings for an intersection in the Parisian business district of La Défense. Courtesy of Julien Gazeau/Colas. 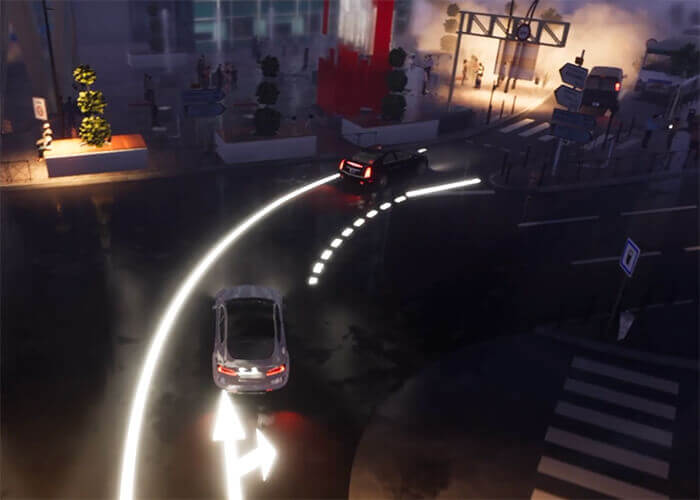 “Generative design enabled us to determine a solution that would avoid disrupting traffic during construction,” says Bernard Sala, President of Routes de France and Deputy General Manager for Responsible Development and Innovation at Colas. Courtesy of Julien Gazeau/Colas.

Generative design is another solution that has proven to be quite convincing. It was tested during Cola’s Flowell project, which used road-embedded LED panels to dynamically light up an intersection in Paris, making it safer to cross.

The project was awarded a Silver BIM in the Pioneering Approach category at the BIM d’Or Awards in September 2020. Sala says that the use of generative design allowed the incorporation of “more parameters and constraints than a human could ever produce, resulting in the creation of multiple scenarios in record time.” It also allowed the team to determine a solution that would minimize traffic disruption during construction.

Setting Sights on the Transition to Green

Thanks to the rise in new electric, autonomous, and carbon-neutral forms of transportation, infrastructure design can now play a role in the energy-saving policies established by the European Union as part of the Green Deal.

Case in point: Nearly half of France’s greenhouse-gas emissions are generated through the use of infrastructure. A 15%–30% reduction in emissions could be achieved by 2030 through low-carbon programs and the development of electric vehicles, soft urban-transport policies, and associated infrastructure.

Green road-infrastructure projects are popping up across the industry, driven by initiatives such as the Voluntary Commitment Agreement, which was signed in France in 2009. Today, plant-based solutions could cover many infrastructure needs without reliance on petroleum-based products. As Dumont points out, this could encourage stakeholders to adopt more environmentally friendly solutions.

“Part of our mission is to develop new processes and methods so that consulting engineers who support contracting authorities can benefit from greener alternatives,” he explains. Dumont believes that this is how the industry can reach an equilibrium among economic, technical, and environmental factors in order to “build sustainably, respect continuity, and reuse resources.”

The Eiffage Group, a pioneer in ecological road materials, has demonstrated the early potential of this trend. The group has developed a number of plant-based processes such as Recytal-ARM®, which can reduce energy consumption by more than 50% and greenhouse-gas emissions by more than 70%. This is done through a cold-mix recycling process that uses a pine-sap-based emulsion called Rectyal®. Eiffage Route is the first French roadworks company to obtain certification for an organically based product intended for use in road construction and in urban development.

Revved up by these new technological and ecological solutions, the road industry is on its way to becoming the driving force in a green, sustainable society. Nevertheless, to build the roadways of the future, the industry itself must first undergo a transformation—one based on a digital, systemic approach. “All this is possible when combined with a new way of governing infrastructure,” Sala says. “There is no reason that roads wouldn’t undergo the same changes that buildings have in order to achieve holistic management of their energy, recyclability, and environmental impact.”