“There is a gaping hole in the prosthetic market,” says Abhit Kumar, cofounder of Indian prosthetics start-up Social Hardware. “Our aim is to fill that hole with prosthetic devices designed specifically for low-income rural amputees from the agricultural or construction industry, as this is where most of the casualties occur.”

According to a report from India’s Ministry of Statistics and Programme Implementation, 2.21% of the country’s population lives with a disability. Of that population, 20% have a disability of movement, and most live in rural areas. The highest rate of amputation occurs in these rural settings, where the main employment is in agriculture and construction. Prosthetics are typically imported from overseas and can cost more than six times the average monthly income of a rural Indian family.

After researching existing solutions, Social Hardware cofounders Kumar and Cameron Norris saw a need for a new approach to upper-limb prosthesis design. The pair met through the online community Reddit, where they contributed to an open-source prosthesis project to help a fellow user with a disability. Kumar came from a biomedical and robotics background; Norris worked in the UK start-up world. 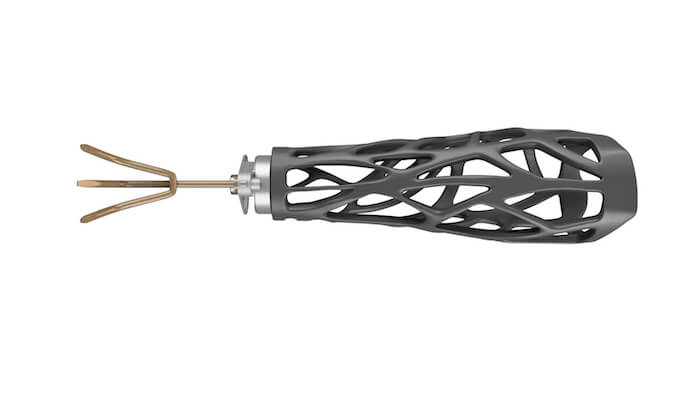 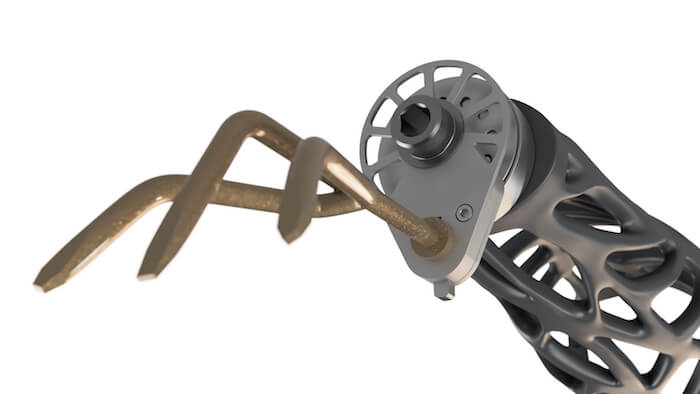 Alternate render of the prosthetic arm with a farming tool attached. Courtesy of Social Hardware. 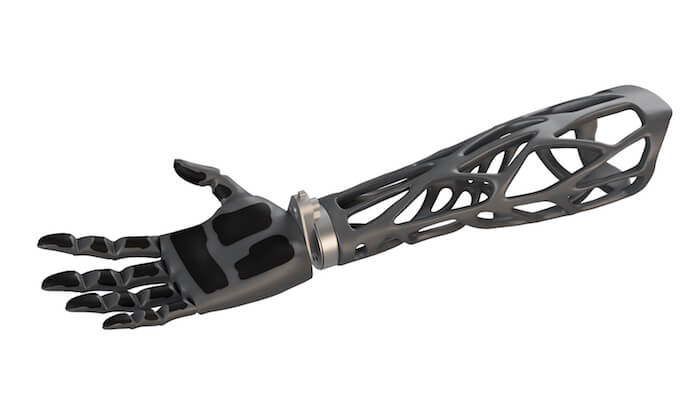 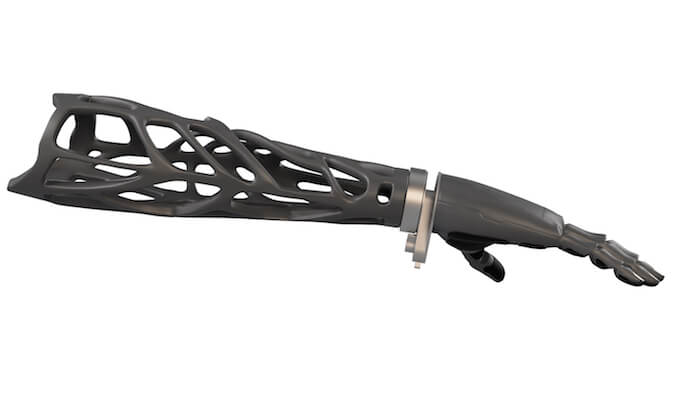 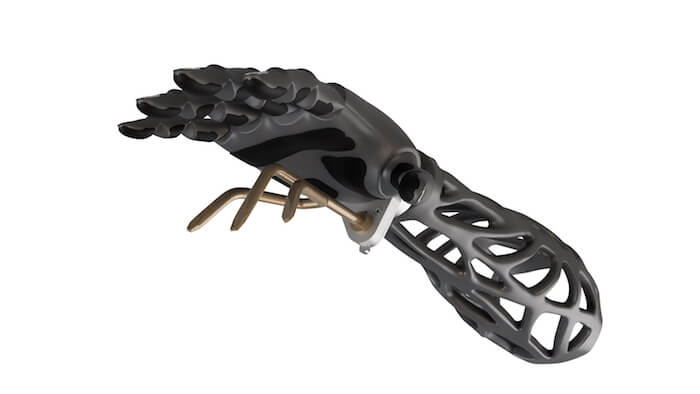 Prosthetic arm with both the hand and farming tool attached to the wrist connector. Courtesy of Social Hardware.

As a recognized start-up under the Startup India initiative and a technical partner of Bengaluru-based nonprofit Association of People with Disability (APD), Social Hardware works toward outfitting amputees in rural India with prosthetic devices and providing rehab opportunities—at no cost to the recipients.

Through partnerships with APD and other disability rehab centers, Social Hardware will provide rural amputees access to a rehab program that includes physiotherapy and training to effectively use an assistive device in their daily lives. The start-up wants to keep the retail price under ₹20,000 (about $280) for each prosthetic hand; those who successfully complete the program will be fitted with Social Hardware’s prosthetics for free.

“By speaking directly with amputees and those working within the prosthetics and orthotics industries, we learned that most devices are unsuitable for end users in rural India,” Norris says. “In particular, durability and hygiene are two major issues not being addressed appropriately.” 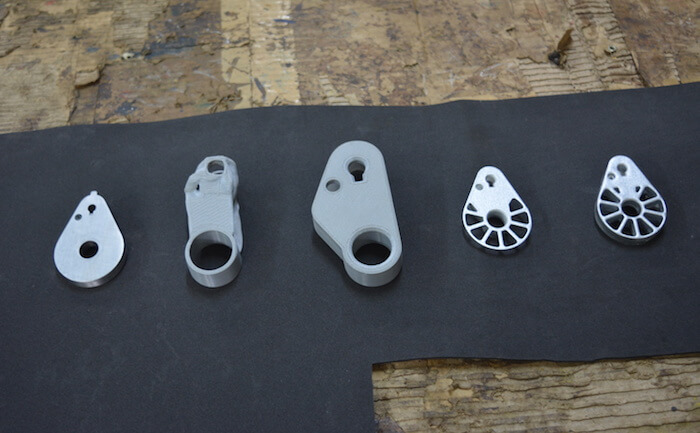 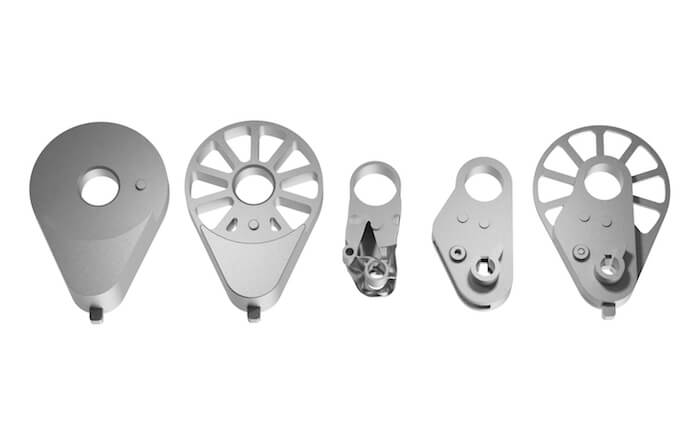 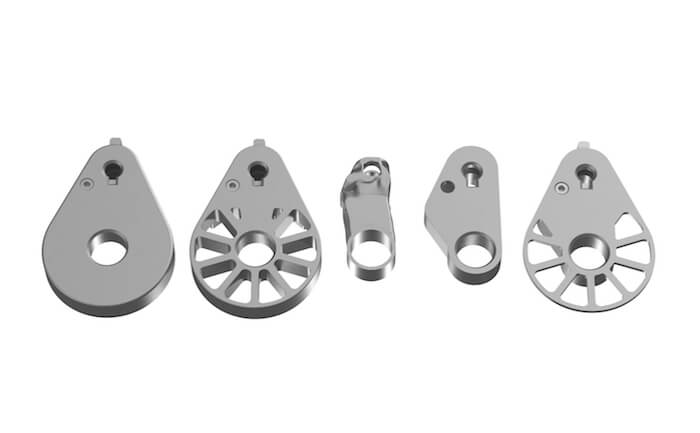 The flip side of the wrist connectors. Courtesy of Social Hardware.

It’s All in the Wrist

Once Social Hardware developed a suitable electric prosthetic arm, the team created the Avocado Wrist Connector, an assistive device used to securely attach agricultural and construction tools to their prosthetics. “We took inspiration from the ruggedness of military hardware design,” Norris says. “We looked through old patents to help us understand how different attachments were mounted in military settings.”

They also wanted it to be compatible with the existing anchor system of connectors and sockets made by ALIMCO, one of India’s largest manufacturers of prosthetic and orthotic devices. “Instead of replacing what was already available in the prosthetics market, we wanted to support and supplement it,” Norris says. “We wanted to create an add-on device that fits between the bionic hand and the socket, which can be used to attach different tools such as a small hammer or a trowel or whatever tool the individual may need.”

To achieve this balance, Social Hardware turned to generative design. With measurements from traditionally fabricated sockets, the team used Autodesk Fusion 360 and a five-stage generative design process to bring down the weight of its Avocado Wrist Connector and speed up the development process. “Generative design enabled us to reduce the weight from 300 grams to 96 grams while maintaining the durability we needed,” Kumar says. “These results would have taken months of trial and error to achieve through traditional means.”

Generative design also helped Social Hardware tackle the challenges amputees experience with their prosthetic sockets and to improve their appearance. “There are issues with sweat and heat, especially in humid environments or if you’re working at a high intensity,” Norris says. “We used generative design to create a lightweight, breathable socket with a unique aesthetic. Although we’re targeting low-income communities, we want them to feel like they have the latest cutting-edge technology.”

Prosthetics for the Masses

As part of their future plan, Kumar and Norris want to transition from a working prototype to an end product ready for mass production. Preparing for clinical trials before releasing their product as a medically certified prosthesis, they plan to work with international aid agencies and humanitarian organizations to bring their devices to other APEC countries that need them.

Moreover, Social Hardware’s founders want to provide the first commercial version of their device for preorder as a prosthesis development kit for STEM (science, technology, engineering, and math) education. The kit will include everything hobbyists, researchers, and students need to build their own prosthetic hands.

“We’re providing the kit to raise awareness of India’s rural amputee population, encourage others to participate in the development of assistive technologies, and for young graduates to understand the concept of design engineering and fabrication,” Kumar says. “It also builds on our foundation: frugal innovation and participatory design.”