As COVID-19 shut down the nation during the first half of 2020, the US government responded with the Coronavirus Aid, Relief, and Economic Security (CARES) Act, a stimulus package designed to inject trillions of dollars into the economy. One key part of the act, the Paycheck Protection Program (PPP), allocated $350 billion to help small businesses prevent layoffs.

The PPP had a rough start, quickly running out of funds and drawing bipartisan ire when a number of wealthy corporations received generous loans while small businesses struggled to obtain funding. But Congress authorized an additional $320 billion in late April 2020, and millions of additional loans have been distributed. Now, after the stress of trying to get funds in the first place, many small businesses are facing another challenge: figuring out how to spend them.

The general outlines of the program are well understood. If a company uses at least 60% of the money for payroll costs (maintaining staffing levels and salaries at pre–COVID-19 levels) and applies the remainder to mortgages, rent, and utilities, it can receive PPP loan forgiveness; companies that use less than 60% of the funds for payroll are eligible for partial forgiveness, thanks to the PPP Flexibility Act signed into law on June 5, 2020. Employees receiving the funds must live in the United States, and payments to individuals are capped at the equivalent of an annual salary of $100,000. Businesses must also spend the funds within 24 weeks of receiving them (increased from an original eight weeks by the PPP Flexibility Act). Those that fail to meet these criteria must pay back their loans at a 1% interest rate within five years.

Beyond this, however, a number of important details are still fuzzy. Many recipients have been unsure how to use the funds to ensure PPP loan forgiveness—and even whether they should accept them in the first place. Heeding the following four tips can help.

A quick Google search turns up detailed advice about PPP loans from organizations of all kinds, but much of this information is outdated or inaccurate, according to Seth Webber, a principal at accounting firm BerryDunn. “It is no ill intent on anybody’s part; it’s just that things are moving so fast,” he says. “I had a blog post I put up the night before the program went live. After we put it up, they changed the interest rate on the loan, so the blog post was wrong.” BerryDunn quickly updated his post to reflect the new information, but there’s no guarantee that every organization has done the same.

As a result, Webber advises clients to stick to official government sources—the Small Business Administration (SBA) and the Department of the Treasury—whenever possible because both agencies update their sites after releasing new guidance about the program. “Just keep checking the SBA website,” he says. 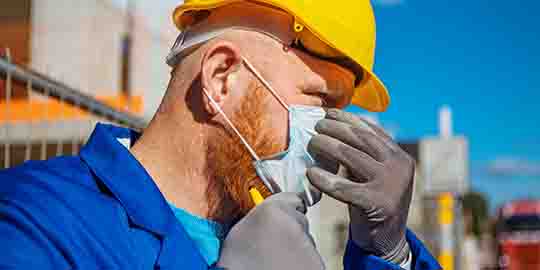 Webber also urges companies to seek advice from their professional service providers: bankers, tax attorneys, accountants, or auditors. But even financial professionals are struggling to interpret some aspects of the program.

“It’s not black and white,” says CPA Diane Datteri, the controller of Build Change, a Denver-based nonprofit builder. In particular, it’s not clear how or when borrowers will need to report how they’re using the loan in order to qualify for forgiveness. “It’s not just an easy spreadsheet that everybody fills in right now,” she says. “There are a lot of unknowns.” To keep up with the latest developments, she regularly attends PPP seminars held by Build Change’s auditors. In addition to checking the SBA website periodically, PPP loan recipients should watch out for updates from their banks, as some lenders are also coming out with their own specific guidance.

2. Be Conservative With Payroll

PPP’s rules regarding payroll have been particularly confusing to many companies. When San Francisco architecture firm OpenScope Studio received its loan, it wasn’t certain exactly which aspects of employee compensation it was allowed to cover with the funds. What about bonuses, for example, or particular kinds of medical benefits? “It was all a little unclear—the actual details of what the money was for—and the process of getting it forgiven,” says Ian Dunn, principal at OpenScope Studio.

According to Webber, the government has yet to provide guidance on many of these issues: “There’s been some back and forth about health insurance and retirement plans and some of those things, and we don’t have a ton of clarity on that yet, in terms of what the SBA intended or how they interpret it.” As a result, he advises his clients to err on the side of caution. “We’ve been counseling people to just go with normal wages, normal payroll—to not think about bonuses or retirement-plan contributions,” he says.

April Hughes, the managing principal of Chicago architecture firm HPZS, is administering her PPP loan based on information provided by her payroll company, ADP. “They made it really easy to download what those [full payroll] costs are to our firm, and we supplied that direct data as part of the loan application,” she says. “As I understand it, payroll tax plus payroll, taxes, et cetera, are all included in the payroll calculation. But as far as issuing bonuses and all that different stuff, I’m not even engaging in that.”

Webber says that it’s important to keep in mind that the program’s goal is to keep people employed during an economic downturn. “If you’re using the money for the original intent—which is to support paychecks, to support payroll—then it’s hard to go too far wrong,” he says.

Even if the government ultimately determines that a company went too far in calculating its payroll expenses and refuses to forgive the loan, the company is simply required to pay the money back at a low interest rate.

Due to the uncertainty surrounding many details of the program, it’s even more important than usual to keep immaculate records.

Because it’s not clear if or how companies will be required to report their spending to obtain PPP loan forgiveness, Webber suggests that borrowers prepare a formal memo explaining how they chose to use the funds and explaining the rationale behind their decision. This will put them in a strong position to answer questions from auditors in the future.

He also says that small businesses now receiving funding should consider placing it immediately in a separate bank account and instructing their payroll company to use this account for employee compensation through the duration of the loan period: “If any amounts that came out of that account went to a payroll processor, it’s pretty clear it was used for payroll,” Webber says, noting that many banks have been strongly encouraging this practice.

Instead of setting up a separate bank account, Build Change opted to create a new cost center in the organization’s books, Datteri says. By having employees bill their time to a different cost center while the loan is active, she’s ensuring that salaries won’t be accidentally drawn from non-PPP funds (grants, for example) instead.

4. Don’t Fear an Audit if You Applied for and Accepted Funds in Good Faith

One critical question about PPP loans was clarified on May 13, 2020, when the SBA and the Department of the Treasury released updates to the PPP’s FAQ. According to Brian Turmail, vice president of Public Affairs & Strategic Initiatives at the Associated General Contractors of America (AGC), the new guidelines addressed the construction community’s top concern about the program: the potential for criminal liability. This fear grew out of Treasury Secretary Steven Mnuchin’s threat to pursue legal action against large companies that accepted loans despite having access to other sources of capital, unfairly taking resources intended for small businesses in need.

But the Treasury’s warning created confusion for many companies, including AGC members. Contractors are often required to have access to a line of credit in order to maintain construction bonds; as a result, it wasn’t clear whether they might be considered in the same category as wealthy corporations trying to game the system. In a recent survey of AGC members, 18% of respondents said they were considering returning their PPP loans because of concerns about potential liability. Many of these companies said they would have to lay off staff as a result.

The May 13 update relieved these fears by stating that all borrowers who received less than $2 million will be assumed to have accepted the funds based on real financial need. Those who received more than $2 million may be audited to determine whether they took the money in good faith, but even if they’re deemed to have acted inappropriately, they won’t be liable for criminal prosecution. Instead, they’ll simply need to pay back the loan.

With this clarification, Turmail believes more contractors will feel secure in accepting the funds to keep their employees on staff. “We wouldn’t be surprised if many of those 18% who said they were thinking about returning the money decided to keep it,” he says.

Disclaimer: Autodesk is not a tax or financial adviser. Businesses should always consult their accountants or tax advisers for information specific to their needs.