As the transition to digital manufacturing enters a new decade, the technological faces of the movement haven’t changed—but the state of Industry 4.0 is far from stagnant.

“The three major technology trends are still additive, automation, and the smart factory,” says Russell Waddell, managing director of the Association of Manufacturing Technology’s MTConnect Institute (and resident at the Autodesk Technology Centers). This set of technologies includes artificial intelligence (AI), drones, augmented and virtual reality (AR/VR), and the Internet of Things (IoT)—all of which have defined Industry 4.0 for years.

The vital trends to watch for in 2020 revolve around efforts to connect smart-component technologies and their resultant data into functional systems, keep those systems secure, and cultivate a thriving workforce for a maturing Industry 4.0.

Carroll Thomas, director of the National Institute of Standards and Technology (NIST) Manufacturing Extension Partnership (MEP), runs a national network of centers helping US manufacturers adopt advanced technology. According to the US Census Bureau, 75% of small manufacturers have fewer than 20 employees, and Thomas says many small and midsize manufacturers (under 500 employees) are now moving into the automation of processes and the supply chain that larger manufacturers have done for years.

“Cobots are huge now,” Thomas says. “A lot of Tier 2 and Tier 3 suppliers are going into automation in a more thoughtful, strategic way, using sensors and AI with IoT connectivity. They’re digitalizing their whole operation. This integration is now becoming mainstream.”

Dr. Thomas Hedberg, a mechanical engineer and co-leader of the Smart Manufacturing Systems Test Bed at NIST, believes that Industry 4.0 has matured to a point that there is basic agreement on the problem to solve: connecting all the data and systems together so a product’s design, manufacturing, and inspections stages all flow and feed back into each other.

For example, an additive manufacturer may take hundreds or thousands of pictures of the melt pool as a laser melts powder; “They’re trying to connect that data back to the process parameters of that machine,” Hedberg says.

“When all these process silos in manufacturing were developed, people weren’t thinking about connecting them,” Hedberg says. “But expert systems have developed inside those silos. So instead of breaking the silos down, why don’t we cut holes in them and put a pipeline between them? That’s the ‘digital thread.’ The problem is a system-engineering problem and requires an interdisciplinary team led by systems thinking. That’s where the standards come in, and some standards are starting to align.”

The royalty-free MTConnect machine-technology standard, which Waddell manages, takes input from more than 400 system integrators, machine builders, software developers, and end users from all industry sectors. From his top-down perspective, Waddell sees that the thought leaders in connected manufacturing have started to think beyond the design, manufacturing, and inspection stages of a product lifecycle to include post-production maintenance in the field.

For example, if the US Navy ordered a ship from Newport News Shipbuilding or General Dynamics Electric Boat, two forward-thinking suppliers, the Navy might want what are called as-designed, as-built, and as-maintained models. “The maintenance contract may include something like reinspection of the ship for what it looks like as-built,” Waddell says. “A 3D scan of the interior of the ship to reflect changes back to the initial model.”

Hedberg says that solving the connected-data problem in manufacturing requires edge computing, which differs from cloud computing in that more (or all) work for processes like encryption and machine learning are done on the device, rather than in the cloud. And unlike personal computing, software is updated automatically and security managed centrally instead of by the user.

“Our current devices have some decent power, but they’re not powerful enough to do the more advanced data-crunching optimizations,” Hedberg says. “You’ve got to be able to do some basic processing at the edge, move data around quickly, and provide answers back to the factory or machine.”

Edge computing reduces the latency of processing and uses much less bandwidth. It also has the potential to offer significantly better cybersecurity if it can keep enough private data off the cloud and its vendor-updated security features are good.

Cybersecurity is already a big concern for connected smart factories; it will only loom larger with the spread of 5G connectivity. With 5G, networks are converted from mostly hardware to mostly software, so while 5G offers advantages like greater bandwidth, it’s also more vulnerable to cyberattack.

“We’re desperately trying to make these small companies getting into automation and sensors to also think about cybersecurity,” Thomas says.

As Thomas travels extensively to manufacturers (especially small and midsize) throughout the country, she sees one chronic problem affecting every region: Factories cannot find enough skilled candidates to fill their job openings.

She cites a plastic-extrusion plant that takes every qualified graduate from Vermont Technical College and still can’t fill its positions; a filter manufacturer in Alabama that puts up billboards for job openings; and a factory in Tennessee that gives jobs to as many of its employees’ kids as possible.

This lack of qualified workers has influenced many midsize manufacturers’ embrace of automation and other Industry 4.0 technologies. However, Thomas says they’re doing it without eliminating jobs.

“They’re going into technology not to get rid of employees,” she says, “but to help build needed capacity.”

Cobots and automation are still expensive; small and midsize manufacturers are adopting them out of necessity, not as a way to save money by eliminating jobs. In fact, Thomas says Industry 4.0 automation is creating higher-paying jobs for maintenance technicians. Other factory job wages have increased somewhat, but not as much as the labor shortage would suggest. 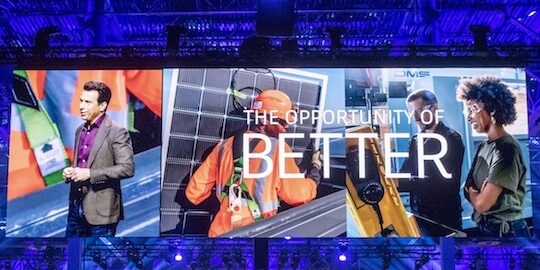 “They use new technology to augment their workforce,” she says, “but they need people who can run and maintain the equipment. These technicians are the ones that everybody is stealing back and forth from each other.”

To combat the manufacturing-employee deficit, Thomas recommends educational reform and the growing movement for diversity and inclusion (D&I) within the sector. “Reach out to anybody who wouldn’t normally work in a plant,” she says. “People who are about to retire, women, disadvantaged folks, people contemplating whether to go to college.”

Thomas also advocates for a stronger link between smaller manufacturers and educational institutions to better expand and train the workforce at events such as the OECD Local Development Forum in Belgium and the ManpowerGroup web event “Women, Let’s Catch the Shift,” both late last year.

“I think all education actually needs to be rethought,” she says. “It should be lifelong learning, where you plug in every day to figure out what’s new. The number one quality all these employers want is somebody who has an aptitude to learn. Somebody who can adapt and pick up things quickly.”