When people think of Henry Ford, they generally think of the man who brought cars to the masses. But did you know that he also pioneered the 40-hour workweek and introduced a daily $5 salary—both of which seemed radical at the time?

Although Ford didn’t actually invent the automobile or the assembly line, it was his genius combination of the two—car building and assembly-line manufacturing—that forever changed the automobile industry not only in America but also across the globe. It’s clear that Henry Ford’s manufacturing innovations were revolutionary.

Ford’s fascination with all things engineering started at a young age. As a kid, he loved tinkering with watches; he was so good at it that he became the neighborhood watch repairman. Watch the video to learn about Ford’s lifelong journey from tinkerer to manufacturing legend.

[Editor’s note: We acknowledge that Henry Ford’s contributions to manufacturing and workplace innovations do not paint a complete picture of Ford’s legacy—a legacy that also includes his promotion of anti-Semitic views. The purpose of the Redshift “Respect” series is to highlight innovators’ contributions and accomplishments across the manufacturing, architecture, infrastructure, and construction industries. While Ford left an undeniable legacy in revolutionizing the auto industry, we encourage you to read PBS: Ford’s Anti-Semitism to learn more about Ford’s legacy.]

Steve Shotwell, President, Ford Piquette Avenue Plant: Henry was able to spend a brief moment with Thomas Edison to say, “Thomas, I’m working on a new invention, something to do with automobiles that run on gasoline,” thinking that Thomas would not be accepting of it. Indeed, Thomas was very accepting of it. He gave Henry credibility for what he was doing; gave him encouragement; and said: “Don’t stop. Keep going. Keep working at it.” His discussions with Edison gave him the energy, the passion, and the drive to follow his dream to work on a gasoline-powered automobile.

He learned that he was much more interested in mechanical devices, how things work.

He credited two events in his youth with shaping the course of his life.

He could take anything apart and put it back together again and make it work.

In his early teens, a pocket watch from his father so captivated him that he began dismantling and reassembling his friends’ and neighbors’ timepieces, gaining the reputation of a watch repairman.

At 12, he witnessed the operation of a Nichols and Shepard road engine. It was “the first vehicle other than horse-drawn that I had ever seen,” he said.

Trains were a primary method of transportation, but Henry had never seen one that wasn’t on a track. So this road engine was compelling.

Henry and his mother were very close. As a matter of fact, Henry later acknowledged that his tie to the farm was more about his mother than anything else. And once she passed, it was challenging for him to keep that passion and that love for staying on the farm.

In 1879, he took a low-level job as an apprentice where he learned tooling and other primary skills that he’d use later on. Those jobs came very frequently, one after the next, because he saw new opportunities to learn and do new things.

Ford became an engineer with the Edison Illuminating Company of Detroit. There, he learned skills that led him to create his first self-propelled vehicle, the Ford Quadricycle.

Ford created multiple failed companies prior to the Ford Motor Company, which was established on June 16, 1903. It was the beginning of a technological revolution in both automotive design and manufacturing techniques.

The company started off in a rental facility on Mack Avenue. It was there for about a year and produced a car called the Model A. The Ford Motor Company was successful in introducing additional new cars that showcased improvements and innovations, all of them leading up to the Model T.

On Oct. 1, 1908, the Model T debuted. With its steering wheel on the left, which every other company soon copied, the car was simple to drive, easy to repair, and inexpensive. In 1925, the Model T was so affordably priced at $260 ($3,837 today) that most American drivers had learned to drive on one. Sales skyrocketed, signifying a new era in innovation for the rising middle class. Through these efforts, Ford turned the automobile from an invention bought by the rich into a true innovation available to a wide audience.

The Model T was quickly named “The Car That Put the World on Wheels.” It was affordable, reliable, and attainable, and it mobilized the world.

The Ford Piquette Avenue Plant, where the Model T was created, is now an automobile museum dedicated to Ford’s legacy.

Factories were busy and constantly changing, but some important things happened at the Highland Park Plant. Workers, even here at Piquette, wondered: “Maybe there’s some other things we could do. What if that car was moving as it was being assembled?” And it was at the Highland Park Plant in December 1913 that the first moving assembly line appeared. 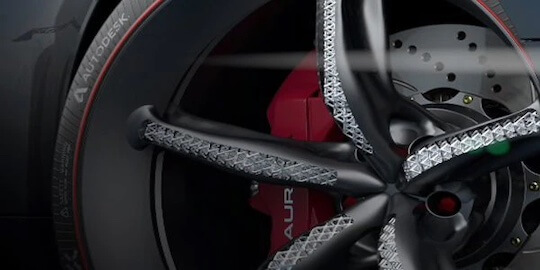 Now, instead of workers moving around to work on the parts, the factory was organized so that workers were stationary while the vehicle moved down an assembly line. This goes back to the railroad concept: The company had multiple rails set up inside the factory and the vehicles started with the chassis and the axle, and eventually they rolled along the track, and workers assembled the parts. As the vehicle would come to the workers, each worker was trained on how to do a particular operation. They would do that operation and then wait for the next car to come along—very effective and timely. They were able to produce lots more cars this way, and the price of the cars went down considerably because they could produce them more quickly.

The workers would be more idle when it was a station assembly, but now there’s a lot of demand on those workers, and they’re going to have to work very hard. Injuries occurred more frequently than they would in an environment where they didn’t have a moving assembly line. And, indeed, the workers, who were working for $2.50 a day for a 10-hour day, it was fatiguing. They were tired, and it got to be more boring than some of the previous work. As a result, some workers stopped showing up for work.

To retain workers and entice others to return, Ford transformed another aspect of work: the workweek itself. Exceeding labor-union demands, he cut the typical six-day workweek to five and doubled the daily pay from $2.50 to $5. Thus, the 40-hour workweek was born. Also included: eight-hour days, vacation and sick days, and standardized wages. Although he was not alone in this, implementing these changes shook up the manufacturing industry.

You can imagine that’s going to have a mammoth impact on profits and the whole industry. Henry’s competitors came out in the newspaper and every other kind of media, saying: “This is ridiculous. This is going to destroy the profits that we’re making in the automobile industry.”

They were wrong. It formed such an enticement that we now had people coming from foreign lands looking for jobs here in Detroit because to make $5 a day was just absolutely unheard of. Those people that had those $5-a-day jobs now were very interested in keeping them, and they knew that they had to show up to work each day to be able to do that. But Henry also created something else. He saw that these people were making more money, but what were they going to do with that money? And one of the hopes was that they were going to buy a car.

Ford’s assembly-line techniques spread throughout the auto industry and other manufacturing industries, as well. High-wage, low-skill jobs became common throughout the sector.

Altogether, Ford Motor Company made 15 million Model Ts. That’s a mammoth number. Henry had 20 locations in the United States that were assembly locations for Model Ts, and there were 21 more around the world. This enabled the world to see the importance of the moving assembly line.

Competitors had really close examples in terms of how Ford was able to economize the manufacturing of automobiles, how they were successfully able to make tremendous growth in terms of profit margins, and so on. So these lessons were being taken to many foreign countries so they could benefit from that. Ford also helped the world because all those workers in those foreign plants didn’t come from the United States. They came from the country where those happened to be installed, and that helped their economy and also their growth and expansion because, now, they had automobiles that allowed them to do things in terms of work and family.

During Henry Ford’s time, a lot of people were working hard and inventing a lot of different things, but Henry stood out well above the crowd for a lot of reasons. First of all, it’s passion. I don’t know another person that had as much passion as he had for what he wanted to do and he was determined to be able to do.

More than 5,000 people per hour filed past his open casket at a public viewing.

The people who were loyal to him—the people that came here—were extremely successful in business and in terms of making money, because those were the things that he could give them as simple rewards. He was going to take other people that had that same passion, that same drive, that same will to do their best, and he made sure that he hung on to those people as well as he could.

Henry Ford had a one-of-a-kind genius for engineering. He ignited an industrial revolution that forever changed the way people work, build, and design.

Engineers and manufacturers around the world continue to envision a brighter future based on the foundation that Ford laid.