Gigafactory construction is now incredibly fast: While most buildings take years to complete, each lithium-ion battery factory can be built in just a few months.

Coined by Tesla founder Elon Musk, the word gigafactory is derived from giga, the unit of measurement for billions. It refers to the factories that produce batteries for electric vehicles (EVs), such as Tesla Gigafactory 4, which is currently under construction in Germany. To drive down the cost of EVs, the quickest way to find savings is in battery production.

“It costs billions of dollars to develop batteries and their cells,” said Stefan Reindl, CEO of the IfA, a German automotive research institute, in an interview with Spiegel Online. “So manufacturers need to produce as many units as possible for every cent spent.” Manufacturers, therefore, have to produce EV batteries in terms of gigawatt hours, rather than kilowatt or megawatt hours. It’s a mammoth task.

In Germany alone, Volkswagen and Northvolt are constructing a lithium-ion battery factory in the northern city of Salzgitter; Chinese high-tech company Svolt has chosen the southwestern state of Saarland as its production location; and Tesla and other companies are building plants in the northeastern region of Berlin-Brandenburg. The Öko-Institut, a German research and consultancy institution, expects global demand to reach 220 gigafactories by as early as 2050.

Because battery transportation and storage costs are extremely high, experts always look for locations near automotive manufacturing plants when planning battery factories. The expertise of engineers, who are in great supply near car manufacturing plants in Germany, builds an excellent foundation for constructing and operating battery factories. And high levels of government funding are boosting the country’s battery industry.

Together with Germany’s central location in Europe, these conditions provide manufacturers with several good reasons to invest in the country.

Gigafactory has become a buzzword, referring not only to Tesla battery factories but also to those of other manufacturers and even to EV factories. The term stands for every aspect of this hugely hyped electric industry.

The speed at which the factories are being built is drawing attention. While other buildings take years to complete, gigafactories are built in just months. Elon Musk is a pioneer in this regard. He is setting the pace for not only the automotive industry but also the construction industry. Musk wants Tesla Gigafactory 4 in Berlin-Brandenburg to be the fastest-built factory in the world. Construction began in July 2020, with completion scheduled for this year.

A large number of German construction companies are involved in the Tesla Gigafactory 4 project, including GOLDBECK, a construction and real-estate firm. GOLDBECK builds parking garages, logistics facilities, production sites, and offices for world-famous corporations such as BMW, Siemens, and candy company Haribo. It also builds schools and residential buildings.

The company’s latest project is Tesla Gigafactory 4. Jörg Strohmeier, managing director at GOLDBECK International, personally conducted the negotiations with Musk and his team. That Strohmeier also grew up in South Africa, not far from where Musk was born, perhaps helped.

“Musk set the pace back in 2019, when he publicly announced that he wanted to build Gigafactory 4 in Germany faster than Gigafactory 3 in Shanghai,” Strohmeier says. Meeting this demand called for digital planning and prefabrication, two of GOLDBECK’s main areas of focus. “The only way we can create a production facility of this size in such a short time is by using standardized components and scalable series production,” he says. 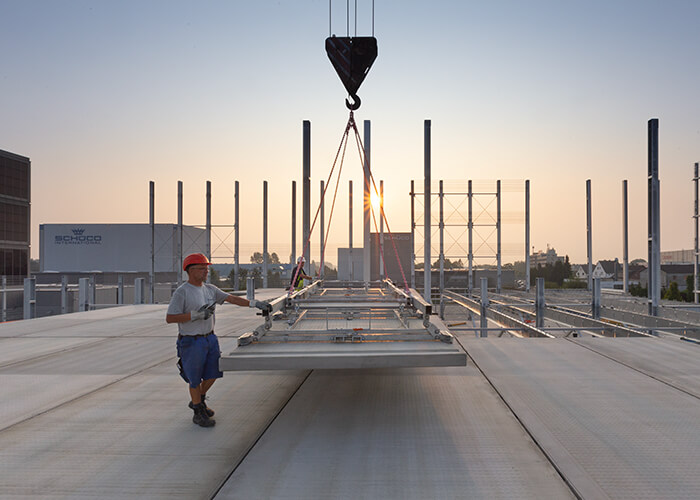 GOLDBECK has 10 factories in which it prefabricates essential construction elements—such as columns, ceilings, and walls—in series. They are then assembled on the construction site in a relatively short time. Courtesy of GOLDBECK. 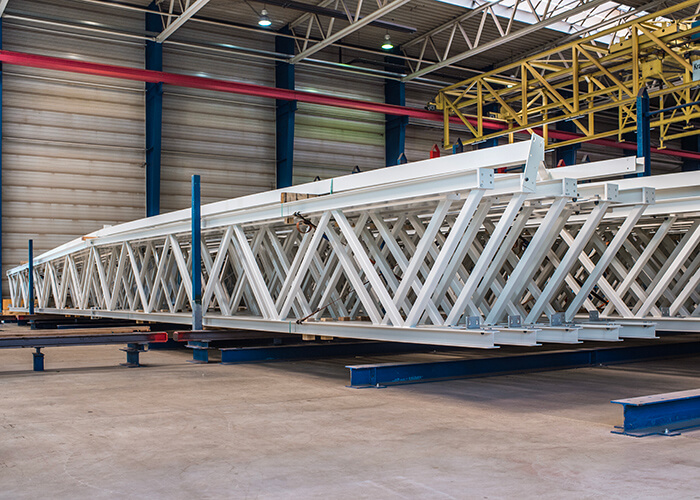 GOLDBECK’s German-made roof trusses were used in the construction of Tesla Gigafactory 4. Courtesy of GOLDBECK. 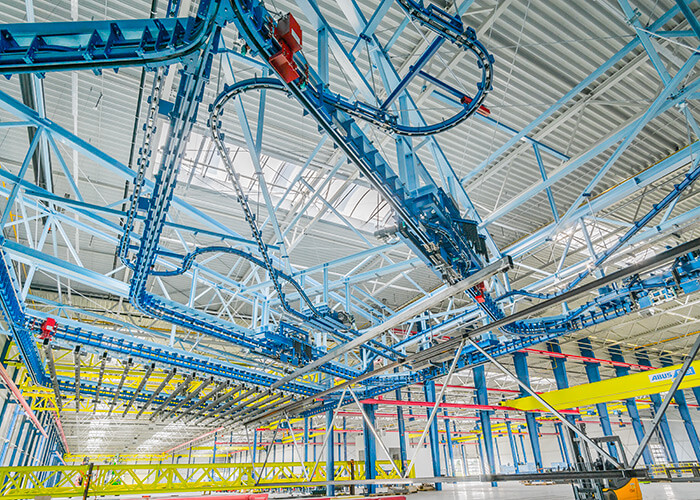 The company has seven precast concrete plants: two in Germany, two in the Czech Republic, and three in Poland. Together, they process more than 14 million cubic feet (400,000 cubic meters) of concrete every year. Courtesy of GOLDBECK. 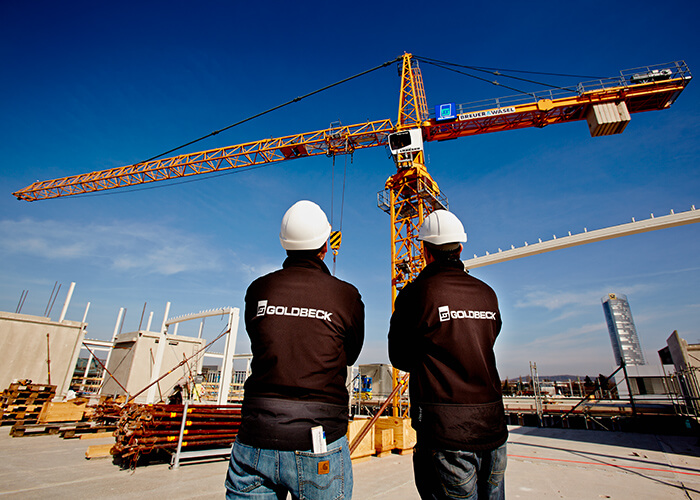 GOLDBECK currently employs more than 7,800 people across Europe, more than 1,600 of whom are active users of Autodesk BIM 360. Courtesy of GOLDBECK.

GOLDBECK sees the building as a product, a view it shares with the automotive industry. Vehicle manufacturers typically complete cars on schedule, barring unexpected delays, and GOLDBECK expects the same performance on the construction site. Essential elements are precast; only assembly is necessary on site. Another factor behind the speedy construction time is the gigafactory’s design as a multifunctional building instead of a built-to-suit factory. “Maybe someday, they’ll be making rockets instead of electric vehicles,” Strohmeier says jokingly. “It’s something this factory could definitely handle.”

GOLDBECK also uses an automated, digitalized planning process. This involves sharing information using a cloud-based BIM (Building Information Modeling) model in Autodesk BIM 360. “The transatlantic time difference would make planning at this speed almost unthinkable were it not for digital tools,” says Strohmeier, who reveals that when the pandemic broke out in 2020, 30 Tesla engineers had to leave Germany overnight and work from the United States. Strohmeier believes that digital technologies can reduce the time required to build a gigafactory by a third. 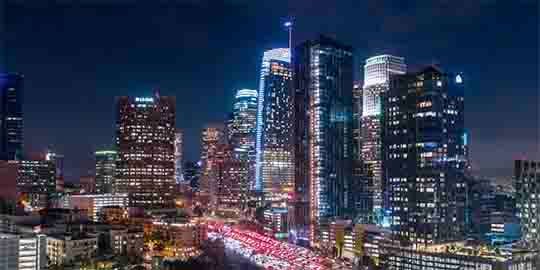 It takes a significant number of people to execute a large-scale construction project like a gigafactory. “That means each team very much depends on every other one, particularly in the coordination of planning and processes,” says Johann Braun, a member of the supervisory board and head of Central Division Building Construction at German construction giant Max Bögl. “Each person involved in the project must ensure information is kept up to date across the entire value chain.”

Braun assumes that employees need to spend two-thirds of their working day collecting and updating information. This time could be better invested in work that enhances quality. “To reduce this waste, we use BIM as a key source of information,” Braun says. “We create a digital twin of our construction project as soon as we begin planning and then add all the information relevant to the project.”

By providing a central access point for the building data model, everyone involved in the project can check the project status at any time, regardless of continent or time zone. “The data from the model is also used to control equipment like mesh-welding machines and reinforcement-bending machines in our production facilities,” Braun says. Cloud-based workflows and an industrialized-construction approach allow Max Bögl to build quickly, efficiently, and economically.

Meanwhile, architectural firm Kohlbecker Gesamtplan, a subcontractor for the construction of Tesla Gigafactory 4, is pursuing a similar digital strategy. “Tesla has a clear, progressive understanding of Industry 4.0,” says Andreas Tomaschewski, Chief Digital Officer at Kohlbecker. “So the factory needs to be built using state-of-the-art, networked, digitalized construction methods if it is to fit the bill.”

Kohlbecker works in the cloud using BIM 360, which Tomaschewski describes as a “quick and precise way to communicate” and a game-changer for better cooperation among all project stakeholders. “The pure client-contractor relationship is gone,” says Benedikt Gondolf, Chief Branch Officer at Kohlbecker. “There’s more and more teamwork on a single level because everyone is working on the same model.”

Kohlbecker has experience building factories for both battery assembly and the manufacturing of battery components. The company was involved in the planning of two Mercedes-Benz battery factories and a BASF factory that manufactures cathode materials for battery production. GOLDBECK is also an established battery-factory expert and is a contractor for the Chinese group CATL and Volkswagen’s e-van factory in Hanover, Germany.

It’s no wonder that construction companies are receiving inquiries from the heads of design at Germany’s leading automotive companies. One of the first things they ask is how it’s possible to build a gigafactory in just a few months. The answer is simple: prefabrication and digital planning.